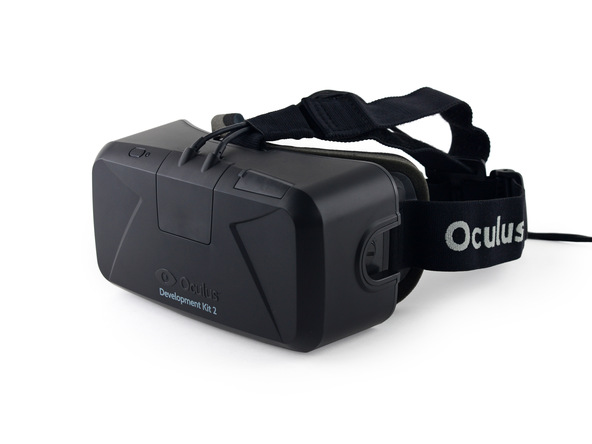 I have been a designer and music producer for many years, so I am a Mac Addict, so I have an iMac, iPad, Macbook, iPhone, and iPod… but was any of these going to be able to run the Oculus properly…? I also have a Leap Motion controller, and bought an Oculus Rift mount long before my HMD arrived. I have a pretty old Macbook (model 5,1) with only a 256MB nvidia graphics card, which works fine for most applications and even games, but the Oculus, with its 75Hz frame rate will certainly push it to its limits.

Basically to make VR an immersive experience, you need to:

Ideally you would get feedback from items (also know as haptic feedback), so object would create simulated weight in your hand, or in the case of Newtons 3rd law, exert as much pressure on you as you are on it. See Newtons laws of motion. The rest of his laws apply for realistic motion, and will need to be considered in the future to create realistic worlds. The next would be environmental feedback, for example radiated heat from the sun, wind on your face etc. Then other sensory devices like smell, or textural qualities, like water on your skin, or rough bitumen.

Haptic feedback items get super expensive, so for the first part, lets assume everyone gets the pieces to use VR in the same order as stated above

There are much better ways to use your hands and move around in VR, but this is the starting point for everyone. If you are interested in researching more, please check out these links or just search on Google. Undoubtably it will be the biggest growing industry surrounding VR:
Hand tracking in VR – Leap Motion – Sixense – Control VR – Nimble
Moving in VR – Omni – infinte treadmills

Basically the less you have to wear the better and more realistic the experience (and more convenient). You also don’t want to be afraid that you will hurt yourself , by falling off something,as that will also dampen your virtual experience by keeping your mind in the physical world. Of course, without hijacking your bodies nervous system, it would be very hard to give haptic feedback without something actually touching your body (for example you will probably need gloves to get sensations on your hand).

I looked online and really I found only very basic disjointed information about how to set it all up, so thought id share what I did and the sites I found to help you all along your OSX Oculus Rift journey in Virtual Reality paradise.

The above pic is my current mini studio, the two left screens run off my Macbook where i use the Oculus and the right is my iMac where I do audio. You will soon learn that if you have an external monitor you have to constantly unplug it and plug the Oculus in . I tried a splitter but it didn’t work. There might be some out there that do which will make life easier but for now i recommend these tips below.

HOW TO SETUP YOUR OCULUS RIFT

Download the Oculus Runtime and demos from developer.oculus.com/downloads (need an Oculus dev account which is free which you will setup the first time you make the site)

To get the Oculus to run, you only really need the Runtime to get the Oculus ready for action. If you are a developer, or plan to play around, get the SDK (software developer kit) and the Tuscany demo (this is generally the first demo people try and has been used millions of times. I also recommend at least trying it as it will be one of the easiest scenes for any computer to play. If you have time, download all 3 as they do link to each other and will provide a more robust set of tools in the future.

You can skip the Tuscany Demo if you are feeling like you want to try something more adventurous and know you system can handle it. To initialize to Oculus, I always use the OculusConfigUtility before using any other program as it initializes the headset and generally makes it resize to the DK2 headset size more efficiently. Continue reading to work out how to do this effectively.

Another very important thing to note is that you must setup your Display preferences.

1. Make the Oculus the “main” screen. You can do this in the “Display” section of “System Preferences” by dragging the tiny white bar to the Oculus display. I also recommend keeping it on the left. It will generally display quite large when running at 1080p. most likely larger than your other monitor (seen on the right). As it is on the left, you should keep your dock on the right. Down the bottom is ok too but i find right is more stable.

One you do this all your open windows will disappear and migrate to the Oculus window.

2. So once you have connected the Oculus headset, you will need to open the OculusConfigUtil – Its has an ugly name and a no icon currently (which i’m sure will be fixed later) but is an extremely important tool, and will tell you that your device is ready for action. Now that you have activated the Oculus as the Main Screen (aka Display 1) you need to right click on it , go to “Options” and click “Desktop on Display 2” which will bring it back to your screen.

You will see a blue light on the Oculus HMD (it is orange when inactive) and an image of the Oculus will appear at the top of the OculusConfigUtil as well as serial numbers of your devices. (This could also be handy if you ever have to repair it). Now you know it is active. You monitor mounted Oculus camera also has a blue light but will generally not turn on until you have opened some software to run it, so do not be alarmed.

3. If you look at the image floating behind on the right, you will see what happens when you click “gather windows” in the bottom right. Its a very handy function to bring the setting windows for BOTH monitors onto the same screen so you can adjust the settings. This is an invaluable tool as be default they appear on their respective screens, making the Oculus settings a little hard to navigate.

You will need to make sure the Rift Headset (HMD) is running at 1080p and is also Rotated to 90degrees. You can choose 60Hertz or 75Hertz, the limit for the DK2 is 70Hz but a Macbook will generally not be able to keep up with the game frame rate so the refresh rate is not that important. The games will tell you if they only support 60Hz also. Keep overscan turned ON.

Finally, start your Demo. If you are using steam it will default to the Oculus as it is defined as the main screen. In case the Steam opens on your computer monitor (Display 2), you can always make it open on the Oculus HMD but doing the same process as before, but choosing “Desktop on Display 1” for steam.

You should open the game from the Oculus HMD, by shutting one eye and choosing “Play with Oculus Rift”. Of course some games do not have Oculus rift support,so be careful and do your research. I have included many links below to get you started. I also made this video of a game I recommend called “Qbeh 1 – the Atlas Cube” (available for $9.99) but you can choose nay game you want. It is an awesome way to learn how to navigate in a VR environment. I also bought a game which would be amazing called “World Of Diving” (available for $19.99) but my computer was way too slow to run it.

Here is my video. Sorry its not very professional. Its my first attempt at videoing an Oculus session, and you can hear the fan on my old Macbook really spinning to run the software. That and the load times, but believe me its much faster when i dotn have all that excess software running. To get best results, restart your computer before you play a game if you can. The link to the game is below in the Recommended section.

WHERE POSSIBLE I WILL PUT THE MAC LINK, BUT PC VERSIONS ARE OF COURSE AVAILABLE

The Rift Arcade – So far my favorite site for finding content with its steam like store  (of which many games are free)
http://theriftarcade.com/market/downloads/tag/os-x/

Rift List – You can narrow by OSX titles easily
http://theriftlist.com/

There are only about 10 title that have native support (including Google maps if – Extreme direction finding is your thing) plus OSX capability but this will expand soon. The site just has links to the original site, so not as comprehensive as the sites above in my eyes. Many would disagree as it was one of the first sites like this.

Dark Field (Space flying shooter. Looks awesome and made by 3 guys in Australia) – this is the direct link to the download.
https://mega.co.nz/#!LEdQCaSK!YVnab10NKcBrEsSMDM9cAHHxqLGCk3twA6S3Ikt9djk
runs extremely slowly on my machine but looks like it would be fun. You cannot support this game on Kickstarter anymore, but I contacted them and they said to play this for now. I will definitely  be trying it as soon as I get the chance.

Qbeh 1 – the Atlas Cube  (as seen in my video above) Walking  around and moving blocks. Good for all ages, except those who have block phobias. Also heights. Fine for slower older Macs.
http://steamcommunity.com/games/252550/announcements/detail/234506502094830839

Guided Meditation – This is truly amazing and run quite well on a slower machine. Also promotes one of my favorite parts of VR being relaxation. You will be blown away at how relaxing it is to sit on the beach, forest or other location and just “be”. Voice over is sometimes a bit cheesy but is also fine and does coax you into a relaxed state. Goes to show that you dont need too much interaction or movement to make an immersive experience.

Here is a video to check it out

Guided Meditation for Oculus Rift from cubicleninjas on Vimeo.

I was super excited to add the Leap Motion to the Oculus Rift, but actually as it turns out there were not as many things to use as I had imagined.Yet. of course everythign is in development. Im sure it will be good. But will it be better than some of the otehr technologies i linked to at the start of this article. Only time will tell

This is just some links for now, but I will write another blog post about the Options for Leap Motion once i have had more time to research them.

Info about it (https://www.leapmotion.com/product/vr)
attach your leap motion to your ocular HMD (head mounted display)
then go here and download the V2 tracking
https://developer.leapmotion.com/vr

Intro into VR with the leap
https://developer.leapmotion.com/gallery/leap-motion-vr-intro

Simple game with leap – very simple but will work on any system im sure.
http://theriftlist.com/Home/Game?name=Rift+Mounted+Leap+Motion

VR collage (requires firefox nightly)
First get firefox nightly builds
http://vrhelloworld.com/builds/osx/
this is the page you visit once downloading the nightly browser
http://leapmotion.github.io/VRCollage/
recommend that you lock your Oculus display to 60Hz, as this is what Firefox currently supports

There are loads of other demos there, but it though this was a fun place to start. You can continue the journey on your own.

« How To Achieve Photorealistic Results in Corona for Cinema 4D